Hello caonimas!  It’s time for the most anticipated post of the year on Kpopalypse blog – it’s time for Kpopalypse to count down his favourite songs of 2019! 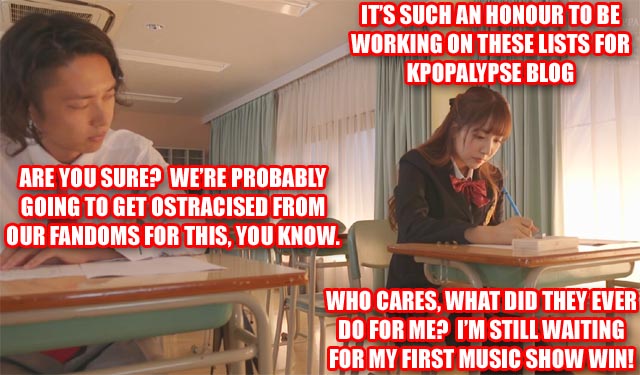 Although serial haters will always try to stigmatise Kpopalypse as “negative”, the fact is that 2019 was a great year for k-pop and I have a big-time POSITIVE attitude about sharing this list of my favourite songs with you, my lovely readers!  The gradual dying down of certain annoying k-pop trends has really helped improve song quality across the board.  While we’re certainly not at Golden Age levels, there’s no denying that competition for this list was very tough and many songs that I really liked don’t appear anywhere on this list or even the honourable mentions!

New readers, or readers who are easily confused, may wish to read the following dot points, which make clear this list’s scope and intentions: 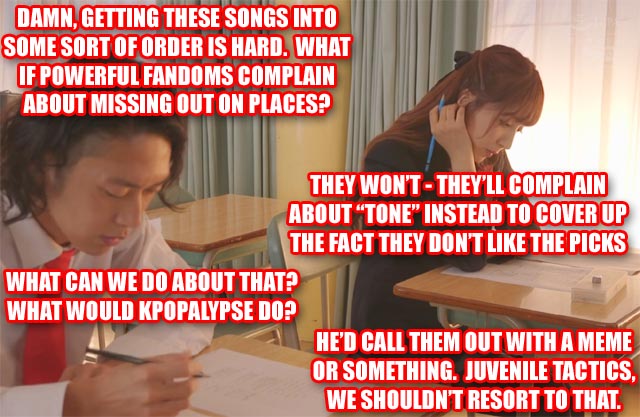 Okay so this video is a bit shit, isn’t it.  However before we castigate Love x Stereo for a complete and total lack of effort, let’s all remember one thing – independent Korean musicians are broke as fucking fuck, even the relatively wealthy ones like Love x Stereo don’t have much funds to go around.  All those videos of little kids saying “please sir, I want some more” that the UK’s Labour party spammed on social networking before the Tories inevitably got re-elected anyway, those kids probably still have more regular income than your favourite Korean independent artist.   The reason why so many people make the deal with the devil and choose to work within the idol system is because it’s very slim pickings outside of that system for nearly everybody in Korea, just ask Korean Indie who probably has to deal with these people begging him for food scraps on a weekly basis.  So I’m going to be grateful for this video even though I’m colourblind and it gives me a headache, because it’s honestly impressive that some independent Korean artists can afford music videos at all.  Once I’ve taken some ibuprofen and paracetamol and given it an hour or so to kick in, I find that it’s not really that bad a visual accompaniment to the fantastic song which has some great instrumentation, a killer second chorus section and is by far the best thing this group have ever done.  The vocal melodies actually don’t start off being all that great, but stick with it and I guarantee you that by the two minute mark you’ll be in love and you’ll be begging whoever did the Hotline Miami games to do a third one just so “Call My Name” can be in it.  The only real problem with it is that the instrumental highlight at 1:51 only happens once in the entire song, but that’s not such a bad fault for a song to have as it just means that you’ll just be rewinding this and playing it again and again like a crazy k-pop streamer following some arcane “how to make your faves popular” instructions.  Sounds like a good idea to me, let’s all pitch in and help Love x Stereo reach that important milestone of 87,582,228 YouTube views and maybe next time they can come back with something that doesn’t just sound great, but also looks better than an Amiga 500 graphics demo.

#죽인다 😍 A necessary purchase for our upcom