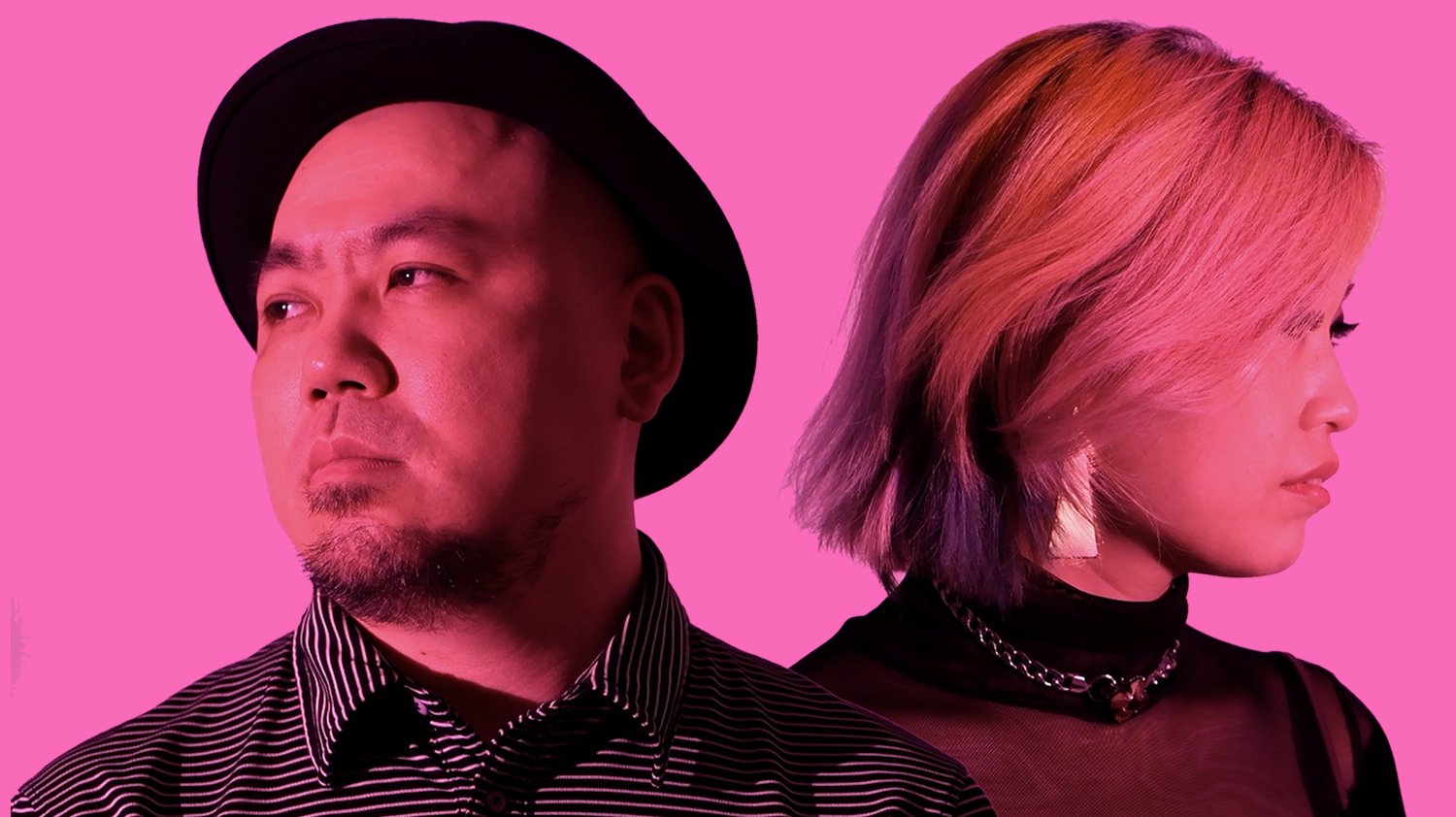 This article is taken from Issue #3 of Platform Magazine. You can order the print edition of our magazine by clicking here.

For the last ten years, Love X Stereo have been a staple of the Korean indie music scene. The duo met in the mid 2000s and, after years of friendship and planning, they formed Love X Stereo in 2011. Fast forward ten years and the band have eight albums, a collection of stand-alone singles, a series of international live dates, and millions and millions of Spotify streams. Today, we’re joined by Annie (vocals, synth) and Toby (synth, guitar, and seemingly about a million other things) to discuss Love X Stereo’s decade-long evolution.

When entering Toby and Annie’s underground studio, you’re immediately struck by how much their recording space matches the electronic duo’s aesthetic. An almost endless supply of synths and modulators illuminated by the warm pink-red hues of their neon-esque lighting system. The band are now entering their 10th year under the name Love X Stereo. Their iconic sound (a stylish blend of 90s rock-inspired songs performed on a mix of electronic instruments) has become an unmistakable trademark of the duo. But, the band tells us, it wasn’t always this way. “Toby was actually in one of the first skate punk bands, back in the late 90s”, Annie says. “Then when we met, we really wanted to make pop-punk music together!”

It’s difficult to imagine that Love X Stereo, with their sophisticated electronica, could have sounded more like Green Day than Goldfrapp, but that initially seemed to be the band’s path. “Our first label signed us as a punk act”, Annie tells us, “but that label had a bunch of electronic artists on it. We were always influenced by electronic music, especially things like techno, jungle and drum and bass. So, after hanging out with these artists, we knew we wanted to change our direction. It was around that time that we got our first synth, and we’ve been making music like this ever since.”

“Changing our sound was inevitable.” That’s Toby. Toby has been deeply involved in Seoul’s indie and punk scenes since the mid-90s and has an almost encyclopedic knowledge of its development. “We started Love X Stereo just as the punk scene was dying. The music and the culture had begun getting stale, and all that was left was the fashion. Trends are so important here in Korea, so when punk started dying, everyone started making hip-hop. And then, after that, everyone jumped onto the indie-pop bandwagon. We’ve always just tried to do our own thing and make the kind of music we love.”

“Ultimately,” Toby adds, “I think the punk scene died because the music coming out of it wasn’t as good as it was earlier on.” Toby doesn’t mince his words when talking about the rise and fall of Korea’s indie culture. He is brutally honest when sharing his feelings on his contemporaries. Yet, while he believes the musicians involved must take some responsibility, he accepts that it is less easy to be in a band now than when he was young. “It might sound surprising, but I think social media is a real issue when it comes to indie culture,” he tells us on the problem of over-accessibility. “In the 90s, we only had TV and radio, so there was a lot of hype around the indie stars. Because they were less accessible, people made an effort to go to shows and support bands.”

“The government is also an issue,” says Annie. “Don’t even get me started on the government.” Annie speaks passionately about the lack of state support for bands and artists. “There’s financial support available, but it’s all messed up. It’s set up like a competition, and you have to perform for their judges. It’s like an audition. It feels really disrespectful towards the music and art people are putting out. It’s very humiliating. They only choose music from the very narrow tastes of the judges, so everything becomes really standardized. They make bands jump through all these hoops, which can be really stifling creatively.”

It has been a long time since Love X Stereo played at a live music venue, but it is something they are hoping to return to in the future. “More than anything, though,” Annie adds, “we want to play abroad again. We’ve been lucky enough to play overseas every year up until two years ago. Overseas audiences have a different kind of energy. The atmosphere is completely different. Partly I think it’s live music culture. When we play abroad, almost everyone is high or drunk. I think there’s something about our music that translates better to audiences outside of Korea, too. Our lyrics are in English, but also the kind of music we make isn’t common here. I think sometimes Korean audiences don’t understand our sound.”

“We do worry about playing live sometimes,” says Toby. “We worry that maybe our style of playing isn’t suited to live music performances in Korea. We don’t like a live setup with a computer, everybody does that, and we feel it’s boring. We’re toying with getting a full band back together, but we’re not there yet.”

The band might have some reservations about using synths in a live setting, but they are enamoured with their gear regardless. In some ways, the entire Love X Stereo project is a love letter to synths and music tech. While we’re sitting in their studio, the amount of electronic music equipment on display is frankly intimidating. Just as you think you’ve seen all the gear they own, Annie opens another door into a room adorned with keyboards, vocoders, modulators, amps, and more. Their current favourite toy is their Behringer ARP 2600. “It’s a replica of a semi-modular from the 70s. The original version of this can go for as much as $10,000, but our one wasn’t that much. We tend to go for analogue synths. Many artists are making music with just their computers, and that’s great, but for us, we always go for something more analogue. It feels less predictable, more punchy.”

The equipment used has a direct influence on the band’s approach to songwriting. “The way we structure a song changes from track to track, and it depends on what instruments and equipment we want to use,” says Annie. “For example, on Wonderous, Toby was playing around with a synth, and it sounded awesome. I just shouted, “record, record!” Then we build on that sound into a full song.”

This approach was tested during their ambitious 37 project, in which the band aimed to produce 37 songs in one year. “We wanted to see if we could create that much music in a short space of time. Which we couldn’t,” Annie laughs. “It took us longer than we expected.” It took two and a half years and resulted in three studio LPs and one remix album. “It was a difficult period of our lives on a personal level,” Annie explains, “so we wanted to just fill our time with music, to take our minds off it. It was also a good way for us to experiment with different methods of distribution. We released the music through Patreon. I’m glad we did it; it gave us more confidence to produce music quickly and to a high level.”

More recently, the band worked on the soundtrack for Zero One, a coming-of-age movie by director Nick Neon. The movie deals with some of the issues affecting young LGBTQ people. “Nick is a dear, dear friend of ours. We provided music for his first film Ultra Bleu, and we created a whole new song for his second film. He’s currently making his third, and we’re hoping to be part of that, too. There’s a nice symmetry, having worked on all three instalments. It was also really fun to be part of it.”

LGBTQ issues are not the only social theme Love X Stereo want to use their music to support. “I always try to use my writing to reflect things I see in the world,” Annie tells us. “Our album We Love We Leave Part 2, for example, is all about death. It reflected something we were dealing with personally, but it also echoed the mourning that we saw in the world around us. This mourning came from the loss of some well-respected public figures and even the collective national grief after the Sewol ferry disaster.”

“Sometimes, though,” Annie adds, “our lyrics don’t mean anything.” She is referring to their latest single All3. This atmospheric industrial-inspired track is named after a specific setting on the synth it was made with. By their usual standards, All3 is a subdued song and shows Love X Stereo in a pensive, introspective mood. This is a band looking back on their journey so far, but also looking forward, eager for the next stage of their evolution.

Love X Stereo’s new single Future Unknown will be out soon. Their collaboration with Night Dreamer’s Mindy will be out after that. A new, back-to-basics EP will be out in the autumn.

#FREEFALL for @peccapics trailer! 🙏 Love to love you -