Continuing on with our spotlight on some amazing Korean indie acts, today we’d like to introduce you to a group who has garnered a lot of attention overseas, especially in North America. The group has been together since the late 90s but their most recent incarnation has been making waves. Please give it up for two-membered alt rock duo Love X Stereo!

Love X Stereo (comprised of members Annie Ko and Toby Hwang) are a two-membered alternative/electro rock duo from Seoul, South Korea. The band has gone through several name and member changes since its inception in 1998, but the current roster is the one getting the most acclaim for their progressive sound. Citing inspiration from indie rock, punk, electronic and the sound of the 90s, LxS has made a name for themselves as an act to watch for, which has given them a chance to play around the world since 2012. In the midst of their touring and recording schedule, member Annie met up with our editor in Seoul for a brief chat on what’s next for the duo.

For those who aren’t familiar with who you are, please introduce yourself briefly.
We are Love X Stereo from Seoul, Korea. We do electro-alternative rock music and our music is mostly influenced by the 90s.
Your group has a very specific niche in terms of the music that influences what you create. Talk about some of the music influencing you lately.
We listen to very new indie rock music all the time. We like to listen to old stuff also. Everything inspires us in a way…so I wouldn’t say there’s a specific band or sound that influences us. These days I find it very interesting how CHVRCHES is doing right now. They’re from Scotland, and as a Scottish band I think they’re heading on a very interesting path in their career. We can learn from that, so I’d like to see what’s worked for them. These days I think the most interesting album I’ve heard recently was Tame Impala’s new stuff…it’s really cool!
Your most recent release was back in February – an EP called ‘We Love We Leave’. Talk about the meaning behind the song.
It’s the first part of two, and the second part will come out later this year. The first EP wasn’t really planned to be honest, but it just happened. We decided to add five of our old tracks that we wanted to reproduce, as well as two new songs – one of which was ‘We Love We Leave’, and the other is ‘My Anywhere’. It’s more synth-pop, and much deeper than stuff we’ve done before. It’s about our honest feelings about how people meet and how we part. The next part will have a similar concept and this album is more focused on love, the next on parting.
You just recently performed at Canadian Music Week in Toronto, which makes that your second trip to Toronto, following Indie Week two years ago. How was it performing in Canada this time around?

With our first trip for Indie Week Canada, we didn’t have very much time to prepare or perform. We were in New York and Toronto and then back to New York in 24 hours so we really didn’t have much time to enjoy Toronto. This time we had four days to spare and two gigs while we were there. Both gigs were in different venues and each had a different feel but we had a really good time in Toronto this time around.
Annie, you were also featured as a panelist earlier this month at Toronto Kpop Con. How did that come together?
Initially Bernie Cho (DFSB Kollective founder) and I had offered to be panelists but were not able to make it in person at that time, so we came up with the idea to Skype in during the panel, so that’s how we were able to be part of it.
The Korean indie has grown exponentially in the last ten years or so. Since you have been around performing for a while, what would you say has changed about the indie scene since you started performing way way back?
The Hongdae indie scene has grown and a lot of great bands have emerged…there are better bands out there now, so it’s quite inspiring. The negative part though is that we’re still figuring out where this is all going and we don’t know. It’s good and bad at the same time.

Since you have also been together as an act for well over ten, fifteen years, how was your sound and vibe evolved since your debut?
We’re always evolving and now we’re down to two members. It’s more eclectic and with the next album coming up, it’s going to define how we sound like. With past releases, we experimented on the sound we wanted to have but now we’re coming to that point that our sound will be defined with our next release, and we hope to have that signature look and style.
Is there anyone in the indie scene that you’ve kept a close eye on in terms of enjoying their music or interest to collaborate with?
There’s a band I really like in Korea called Juck Juck Grunzie. That band is always such an inspiration. They’re comprised of three girls and one guy and they do stuff that nobody does, musically speaking. I also love Rock & Roll Radio, From The Airport, and many others.
Can fans expect more original material from you soon?
Hopefully this fall, but we’re not sure right now.
What else do you have planned for the rest of the year, in terms of shows abroad or anything like that?
Right now it all depends on how well our next EP does, so nothing solid for the rest of the year has been decided yet but we’re hoping to meet our fans again soon.
When you have spare time, what do you do to relax? 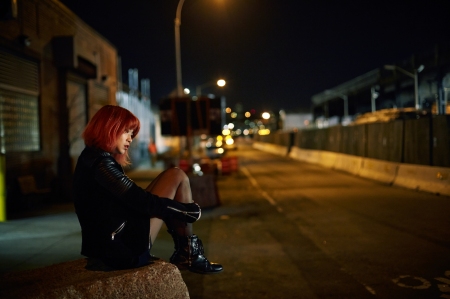 Biking, listening to music or watching Agents of S.H.I.E.L.D!
What is your guilty pleasure currently? It can be anything!
Agents of S.H.I.E.L.D! It’s really good~
What are your five most played songs currently?
“Mouthful of Diamonds” by Phantogram, “All of My Friends” by LCD Soundsystem, “Hey Now” by London Grammer, “Californian Grass” by New Order, and “Wings” by Haerts.
Name one thing that fans may not already know about you.
Whenever we tour overseas, we’re very eager to see other artists perform. We had the chance to see Death Cab for Cutie this year.

Any advice for aspiring indie artists?
You have to define your style, that’s the key.
Any final words for the readers?
Hi everyone! Hope you guys like our music. You can find it on Soundcloud and YouTube. Our latest music video rocks, so make sure to check it out!
Many thanks to Annie for taking the time to talk with us. Anticipate their next release later this year. As always, this has been a rhythm.connection exclusive!

Love X Stereo is at 힙지로.