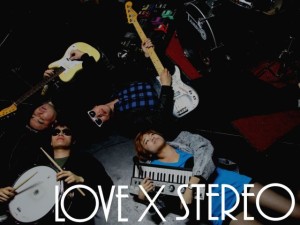 Welcome to another edition of Indie Gem! This time we’re talking about LOVE X STEREO, an electronic rock band with roots in 90s alt and punk rock. Furthermore, the band makes note that their music is danceable, for a fanciful touch.

Initially formed in 1998 under the name Skrew Attack (a skate punk rock band), the group debuted as LOVE X STEREO in 2011 with their EP Buzzin’. Since then, they’ve been steadily gaining fans in Korea, but more so internationally. In fact, LOVE X STEREO is one of the most accessible Korean indie bands I’ve come across, because the majority of their lyrics are in English and they have their hands in a vast array of social media. They are definitely making an effort to reach out to their foreign fans, and are embarking on a North American tour in October and November this year.

As Skrew Attack, they firmly planted themselves in punk, as LOVE X STEREO the band has been committed to an electronic sound. Though deceptive in its light-hearted, often poppy tone, their music is a layered mix of synth, standard instruments and genres. Across their discography, one can hear an evolving play with the digital, not only as effects, but also as an infusion with their rock base. LOVE X STEREO gives electro and rock equal weight, creating music that is both delicate and in-your-face. Though the band’s most recent EP, GLOW, shows their continued move deeper into electro-pop, one can still hear influences of The Smashing Pumpkins andNirvana, which are just a few of their inspirations.

The first track off Buzzin’, “High Road,” illustrates the band’s rawest expansion into a new style. Rock is still the overarching sound, with digital running in the back; it’s not quite an accent, but also not quite strong a feature. Annie’s voice shifts from light to all out punk, expressing the lyrics’ message of defiantly taking a new road, even if it’s a difficult one.

Within Buzzin’, the band’s shift to a dreamy electronic sound is apparent by the third track, “Ocean Breeze,” which is meant to conjure up images of the beach. “Ocean Breeze” was the turning point for the electronic to take center stage. This performance of “Ocean Breeze” shows how many elements go into their music, and also how awesome they are live:

Their next EP Off The Grid was released in 2012. The first track, “Soul City (Seoul City),” expresses the band’s ambivalent feelings toward Seoul.

The heavy drums and driving guitar are still present, however, the mixing is tighter and more intertwined than in their first EP. The song has the feel of fast movement, pulling the listener through Seoul, which is represented in the music video as well. All three tracks on Off the Gridexpress more refined electronic sound, and we start to hear an inkling of the mysterious mood that becomes prominent in their next EP.

This month, the group released GLOW, which consists of four new songs and five remixes. The remixes are results of their numerous collaborations, which can also be heard in the single they released right before the EP, “부끄러워요 (Bu​-​kkeu​-​reo​-​wo​-​yo).”

Fresh off GLOW is “Lose to Win,” an emotional song that serves as a hopeful anthem for those who feel alone and uncertain in life. It begins with an almost otherworldly sound, which puts the focus on Annie’s haunting vocals. “Lose to Win” is a perfect illustration of how the group creates a sound that is both intimate and expansive, dreamy and grounded, direct and wandering.

It’s apparent that they’ve embraced synth-pop with clean electronic sounds, and Annie’s vocals stay in the light, breathy range. However, their signature mix of electronic and rock now works to create a distinct mood for each song, moving beyond the exercise of mixing genres. It’s nice to see how over time, LOVE X STEREO keeps playing with electronic and rock, committing to and expanding on both.

LOVE X STEREO undoubtedly will continue to woo fans overseas, so keep tabs on them. And if you live on the East Coast in the U.S. or in Toronto, see if you can check them out during their tour! And for final funsies, here is their cover of Nirvana’s “On a Plain”: