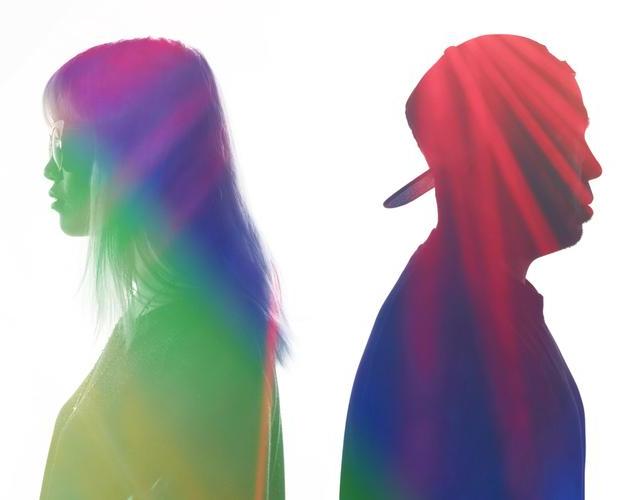 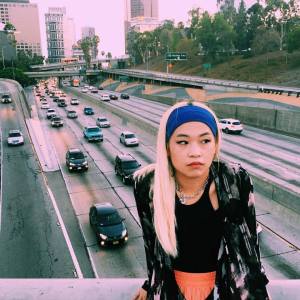 It’s not often that a Korean music group — indie, K-pop, or otherwise — sticks around in the states long enough to not only perform multiple shows but also to have time for some interviews, but this year we got lucky with Love X Stereodoing both of those things in Los Angeles. The electro rock/synthpop duo has evolved a lot since they started making music under the name Love X Stereo in 2011, and now they’re expanding their horizons to markets outside of Korea. To read more about the group’s music, check out our Indie Gem on them!

I had the pleasure of spending some time withAnnie (vocalist and fugitive astrophysicist) andToby (skate punk rocker) over waffles this week while they enjoyed the beautiful Southern California weather so we could discuss not only their current stay in the states but also what their future holds, as well as the future of the Korean indie scene.

So, Annie, you grew up in Los Angeles?

Do you consider yourself Korean or Korean-American?

Probably Korean. But I have a soft spot for LA.

Do you have relationships with any Korean-American indie artists?

Is there a particular reason you sing mostly in English?

Well it’s kinda natural to come out in English first but if the lyrics come out first in Korean I go with Korean. It depends on the song.

Do you think that helps you get more international fans?

I think so. That’s actually what we’re aiming for. Not to stick around in Korea. We want to expand and go outside (of Korea).

This year you performed at KCON, how did that happen?

I think it was more of a government organized thing. The government has their own brand of showcase called K-pop Night Out and they select bands to perform at certain stages like The Great Escape or SXSW and they decided to do a similar thing this year with KCON and they wanted us to perform.

How was your KCON experience?

For us it was ok. I’m kinda surprised that the showcase was in the middle of the convention center, which was weird. There were a few issues with the sound system, but we were ok. The other bands had a harder time. 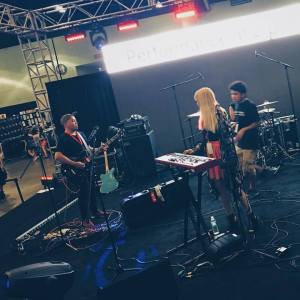 How did SXSW compare?

SXSW was really great. We played at a really big venue and they had like a thousand people watching us and we had a really great time.

The last two years the Korean Indie panel at KCON has been really popular, so it’s a shame they didn’t showcase you more. People really want to learn about Korean indie music.

If I were an organizer that had to do (with panels), I might as well bring an indie artist into the panel to talk about it. It’s a great opportunity to let people know about Korean indie. If they are willing to do it, then we’d consider being on the panel next year.

I think that’d be great! They need people who actually know about the Korean indie scene.

Speaking of indie, what do you feel the current state of the Korean indie community is? Are there more groups trying to promote outside of Korea?

I think a lot of indie musicians are trying out that (international promotion), and I think more and more indie musicians are getting attention compared to ten years ago. I think we have a long way to go because I think the only indie musician that is trying hard to navigate the world is Jambinai, and that’s just a start. The thing is I do believe that if the music or the music video content is good then it will expand itself, but the best way to achieve things quickly is to sign to a label (outside of Korea). But it’s pretty hard for us to do that because we don’t live here. Jambinai did that, they signed to a label, so they’re on their way. We want to do that.

Jambinai’s music is more like world music; it has a certain identity (Korean identity). But ours is more universal; there’s a funny story because I actually met the vice-president of Sub Pop (label) and I made him listen to our music and he said “this is so mainstream.” And I was like, no its not. In Korea it’s not a mainstream music at all, so for us we have to prove so much more than Jambinai (because they have the traditional Korean music sound).

Wow, that’s really interesting. Most people probably don’t think about the difficulties of promoting music cross-culturally or having a sound that works in one country but not another.

You guys have done some OST work in Korea, how did you get into that?

Well, the OST director of Cheese in the Trap liked our music, so he put it in. That was pretty interesting, though. I suddenly felt like we were accepted by the K-drama fans! That song, we didn’t intend it to be in the soundtrack, it was our song but it happened to get in. Which was nice! I feel like we are more accepted by a lot of fans out there now.

Do you think you’ll do more OSTs?

We are getting offers, but like I said before, our music is not mainstream in Korea, but kind of universal everywhere else, and there is a certain type of music the Korean industry wants and we’re not always in agreement with that, so it can be a little hard for us. So we got some suggestions, and we gave them some music, but we’ve gotten mixed reviews. As artists we don’t want to change our sound, so it doesn’t happen every time. We really don’t want to compromise on our music so some productions suggest to us to change the chorus or something, but we said no.

That attitude would probably go over better in America because artistry in music tends to be appreciated here. A lot of Americans are very taken aback by the K-pop system, for example, because it’s so corporate.

But like, I feel like SM, YG, or JYP, technically they’re like an independent label, they’re on their own, so I don’t know! It is weird to grow the system like that though. Children, very young ladies, tend to be grown out of the system so it can be weird — a little like slavery. Like Miley Cyrus or theJonas Brothers?

I guess Disney is really our only company like that!

There’s a label here in LA called Asian Man Records, its run by a Korean-American. They have some famous groups like Less Than Jake and Alkeline Trio. I love their music. We’re also trying to go to the Warped Tour this weekend!

Your last EP came out in April, so what are your next plans?

Our newest single will be out later in August, it’s being produced by Nate “Danja” Hills who produced “SexyBack” for Justin Timberlake. It was a good opportunity to work with him! I think after that we’re going to try to release an LP. We’ve never released an LP so that’s going to happen within this year. So that’s our biggest plans, and possibly a tour next year, but not this year. 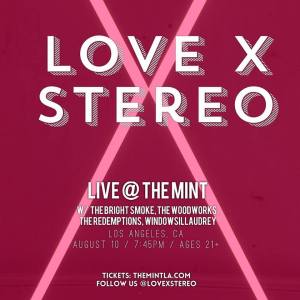 When are you heading back to Korea?

We’re performing at Pentaport Park on the 14th. Right after we arrive within one day we have to prepare to go on stage. At that Pentaport stage we’ll have a special guest. The special guest will be Rock ‘N’Roll Radio’s Jin-kyu; he’s going to play the guitar for us!

That sounds awesome! I wish I could be there!

For any of our readers in Korea, please go to the show at Pentaport Park. You can get ticketshere on Love X Stereo’s website. A bunch of other great groups will be there as well!

If you’re in the Los Angeles area, you can see Love X Stereo on the 10th at The Mint, or on the11th at the Sunset Triangle Plaza.