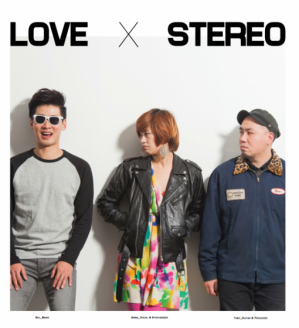 Love X Stereo, a electronic rock based band, consists of Annie (vocals, synthesizer, and percussions), Toby (guitar and producer), and Sol (bass). Their music is based on 90s alternative and punk rock style that every listener can dance to it. In December 2011, they debuted at as group with their demo EP, Buzzin’. They implemented synthesizes and effects to their music that is danceable and easier to listen to.

High Road shows that Love X Stereo has start their own rock music journey that they want to travel even though they know that their travels will be hard. With a mix of rock and electro beats, Love X Stereo brought in their new sounds through this song. Annie expresses the lyrics with soft yet strong feeling that they are willing to take risks through their chosen road.

Ocean Breeze compliments each individual instrumental beats with the essence of bringing the listeners to the ocean to enjoy with no worries. For example, you can hear the raindrop like guitar sound and rattling drums while listening to Ocean Breeze. It was an upgrade for the songs that they have been written and produced while preparing for the demo album. This song makes you feel like you are at the beach listening to the ocean waves.

In October 2012, they released their 2nd EP, Off the Grid, with their main track, Soul City (Seoul City). This was the very first song that I was introduced by a friend. When I listened to this song, I immediately started to like Love X Stereo so much. The meaning behind the song is their experiences and thoughts in the city of Seoul. It is a great song to listen to while you are on a trip especially when you are going to or travelling in Seoul. The mix of drumming and guitaring sound makes the song more fast and upbeat. I think most of the listeners heard Love X Stereo for the first time is Soul City (Seoul City). Definitely a recommendation song to share with friends.

Before releasing the third album, Glow, they released the EP before 부끄러워요 (Bu-kkeu-reo-wo-yo) which is inspired and named after The Jack’s famous catchphrase. While having the repetition of the same word, 부끄러워요 (Bu-kkeu-reo-wo-yo), which means “I’m embarassed”, the layers of instrumental music is build up from start to climax to finish. The song is taking the listeners along the flow of music on flight until they have landed safely on the ground.

Love X Stereo has improved a lot in their production of songs, including mixing rock instruments and electronic synthesizers, with their latest album, Glow, which was released last month. The first track of the album, Lose to Win, gives serene electro-rock sounds with Annie’s angelic voice that sending the inspirational messages about not to give up easily as learning to lose is part of the learning process to do even better to win. An upbeat track, Fly Over, is one definite treat to dance and listen to. The synthesizer, drums, and Annie’s sound are harmonized perfectly that made the listeners to have good times and party like there is no tomorrow.

Then, Love X Stereo give a haunting rock song, Secrets, where a particular person is willing to listen to your secrets and talked about them. The final new track, Crossing Rivers, addresses the issues about the human rights of North Korea. With the calm and strong instrumental beats, it draws the listeners to pay attention to the people who are going through their hardship in North Korea. The final three songs are the Soul City and Chain Reactionof John Gaska and J-Path remixes which has some club beats that is not overly done. 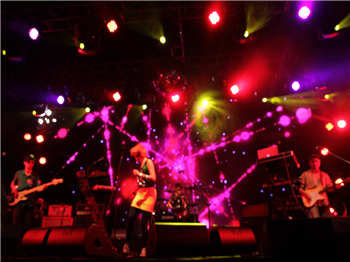 Throughout the three years of their music career, they continue to improve and develop better music as they focus on the quality of music that they could produced. With Annie’s angelic voice and upbeat electro-rock sounds, their music definitely set the mood both relax and outgoing from one song to another. Each of their album has a complete package of each genre of song which is worth about the 30 minutes of time to listen to. Also, they want to produce music that is equal to their capabilities in performing live in front of the audiences. Their music has been spread internationally thanks to the power of social media. Not only these songs are in English, but also the fusion of electro-rock music that every listener could enjoy and dance along with.

Love X Stereo will continue to share their music to the international audiences. Keep an eye out on what are their activities through the following channels: website, Facebook, Twitter, and YouTube. You can also listen to their music through Soundcloud and Bandcamp. Their songs can be purchased through iTunes. They are currently on the US and Canada tour till November so if you can check out whether they will be coming to your city and perform. It is worth seeing and enjoying their live performances.