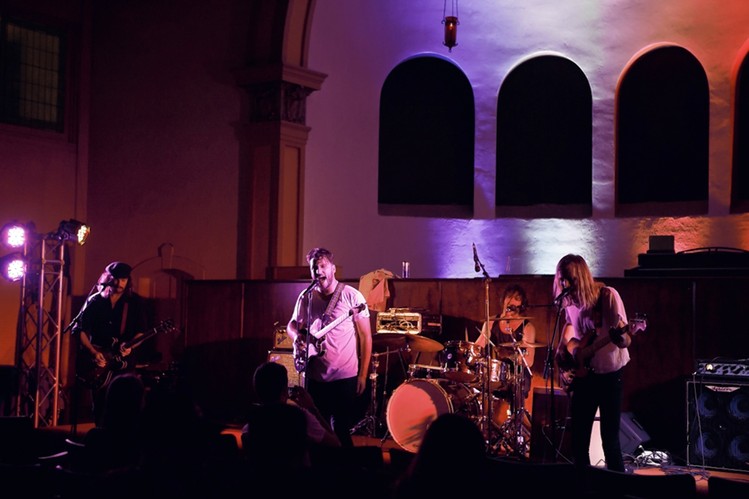 The Netherlands’ Go Back to the Zoo at Culture Collide. JASMINE SAFAEIAN

While new and traditional recorded music from much of the planet is available instantly, some overseas rock musicians are hooked on decades-old influences from the U.S. and the U.K. They are making music with nary a trace of their own national identities.

At Culture Collide, a three-day festival held last weekend in the Echo Park neighborhood here, almost all of the 60 or so bands on the bill from 19 countries, including the U.S. and the U.K., did what they do at home: played forms of indie rock with roots in late 20th-century America and Britain—with lyrics in English. The reason, said some musicians who performed here, isn’t merely to find an audience in the U.S., the No. 1 market for recorded music. Their fans want the music delivered with authenticity, and English is rock’s lingua franca.

If there was something vaguely off-putting about the idea of musicians from Israel, Korea, the Netherlands or Sweden submitting to a one-world standard for rock-and-pop success, all traces of distaste vanished when the bands began to play. From an entirely American perspective, the performances in English were far less troubling than the commitment to a model that’s about 30 years old.

“It’s the ’80s over and over and over here,” said Naama Bengtsson, singer for Takeoffs & Landings, during a pre-festival conversation by phone from the band’s base in Lima, Peru. When drummer Alexandro Baviera of Alphabetics compared by phone his high-energy rock quartet from San José, Costa Rica, with Bloc Party, Foals and Does It Offend You, Yeah?—three 21st-century bands from Britain—he was saying, however inadvertently, that many contemporary groups in the U.S. and U.K. are also tweaking the same retro sound.

Globalization in popular music, with the Web as the great equalizer, may encourage homogeneity, but rock’s hegemony only goes so far. There’s little reason to fear that ethnic folk musicians will abandon tradition en masse to take on the sound of the Gang of Four, New Order or Talking Heads. Record labels like Real World, Six Degrees, World Circuit and others promote regional artists who explore cross-cultural fusion.

But while fans with ambitious tastes in popular music may dream of an infinite number of cross-cultural experiments and the emergence of new forms, musicians are wise to be pragmatic. Given declining album sales and insultingly poor compensation from streaming services, to go global is the smart move.

For many musicians here, the subject of artistic identity isn’t limited to what is inscribed on a passport. The Lima-based Ms. Bengtsson was raised in Israel, and one of her band mates is Canadian. Mr. Baviera came to San José from Miami; he said he’s part Mexican and part Filipino. Korea’s Bobby Choy, an appealing folk singer who performs as Big Phony, was born in New York. He said that when he relocated to Seoul, the indie musicians in the Hongdae area knew well the music of Nick Drake and Elliott Smith, his major influences. Autostrad, a tight sextet from Jordan, performs a joyous blend of Jamaican reggae, Latin music and funk. It was among the few acts here that sang in their native language, but its members’ command of English enabled them to scold a heckler who had spilled beer on their gear, which included a Norwegian keyboard, American guitars and Japanese pedals.

Despite the overly familiar sounds and the lack of musical nationalism, Culture Collide impressed with a well-curated roster. Sweden’s three-piece We Met Tomorrow played folk with disarming self-confidence. Under its roar, Go Back to the Zoo, from the Netherlands, revealed a well-honed instinct for pop hooks, while Korea’s Love X Stereo issued winning, spiky dance-pop—both groups are among the Culture Collide performers who have moved on to New York for this week’s CMJ Music Marathon. Alphabetics was a hoot, with punk and surf guitar in its ’80s mix. As if to symbolize the festival’s underlying message, the members of Skyroads, an electronic pop quintet from Israel, danced with glee at the Costa Rican band’s delightful performance.